Yes, crazy people we are, we got a new dog!  I initially wanted a bitch, but we got Teddy.  He was a lot of hard work for the first 4 months.  We thought it would be good for him if we got another dog, a girl, to keep him company.  Plus, I wanted a girl dog.  I ran it by the lady who organised our re-homing of Teddy and she thought it was a good idea and would keep a look out.  Eventually I got a call about a ‘potential’ dog as the lady was thinking about it.  After a week of thinking about it, we got a call to go and see Amber.  It was love at first sight. Normally, we wouldn’t have been allowed to have her until she was spayed, but we were given dispensation so that she and Teddy could get used to each other before the spaying.  Teddy is a bit of a clumsy teenager and wants to play with everyone.  Amber isn’t interested. Typical lady.  She just needs time.  Amber has just been spayed this week and is on lead walks until next Friday.  I’ve reduced my hours at work so I can walk the dogs in the morning with the hubby and in the afternoon.  Not having had two dogs at the same time before, I wasn’t sure how easy it would be.  Pretty easy, so I didn’t have to do the mornings after a few days until spaying day.  Needless to say, painting hasn’t been priority these last few weeks!  It can be exhausting walking the dogs 2x a day, working 6 hrs, and doing everything else that has to be done.  Thank goodness it gets dark late now!  Here are what keeps me busy:

We’ve also had some decent weather and have been going on some really lovely walks in the countryside.  We need to make use of the good weather while we can as it rains a lot here!

I decided I wanted to paint more landscapes.  I am the least comfortable with this as it is not a thing.  I can more or less paint things, but painting scenery is a real challenge for me.  I really want to learn how to do it especially as I live by the seaside and near the countryside. So I started with skies as they can be tricky.  Here are two that went reasonably well for me: 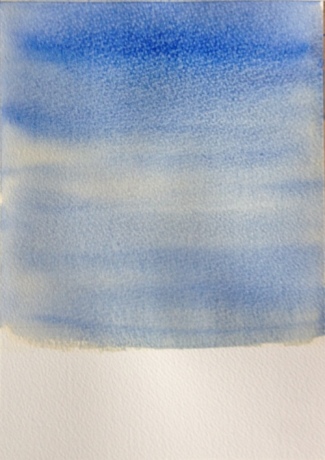 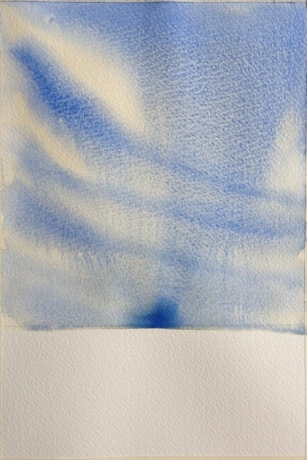 The one on the left is a fairly normal sky and the one on the right is slightly more dramatic.  Both were painted wet in wet.  The one on the right has a bit of a blue blob at the bottom as I forgot to lift out some of the paint that settled there.  However, I can fix that.  Here is a sky that didn’t work out so well: 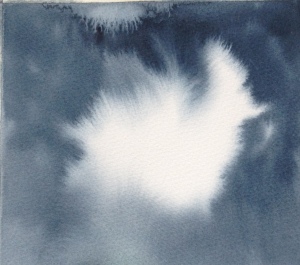 This is supposed to be a stormy sky.  It was working ok until I accidentally touched a wet brush on the paper before it dried – see the mark at the top. I will need to try this again.

So, I have two skies that are ok, but no landscape – so this is what I did: 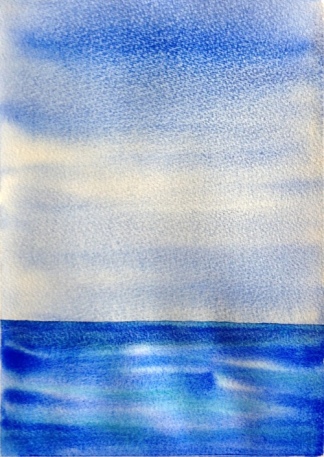 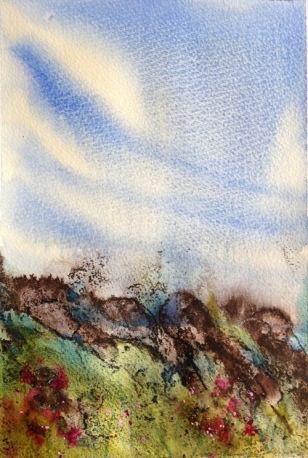 I made a seascape and a landscape.  For the seascape, the sky was painted with raw sienna and French Ultramarine Blue.  I used the Ultramarine blue and Daniel Smith Iridescent Electric Blue for the sea. The Electric blue is a lovely blue/green with a subtle shimmer.  This was just an exercise, but I really like how it turned out.  The landscape was based on a tutorial from Jane Betteridge.  It is meant to be abstract.  I used French Ultramarine Blue and raw sienna for the sky.  For the landscape I used Sepia Ink, Green Gold, French Ultramarine Blue, Iridescent Electric Blue, and Quinacridone Magenta.  I also used a black watercolor pencil and granulation medium.  It was a very wet and messy process.  I think I may need to try this again, but on a larger sheet of paper.  It was also fun!