As the year is coming to a close and Christmas will soon be upon us, I have been reflecting on how I have celebrated this holiday over the years.  As a child, my brother and I would get very excited about Christmas. 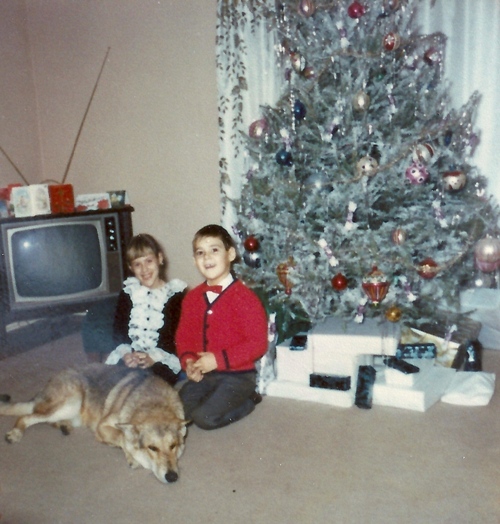 Most of the time we had a real tree that my father was in charge of decorating (he was the arty one).  Fake snow and loads of tinsel, and beautifully decorated glass ornaments that would seem very old fashioned now.

When I got married, I collected similar ornaments and I was sent ornaments from the USA when I moved to the UK.  My children grew up with a tradition that was passed down a generation.

Since I moved from London to the South Coast, I have had to downsize considerably.  Although I have a fairly large loft space, I don’t like having it full of stuff.  So, the decorations the children grew up with got taken up to London and now live with my daughter.  I have given away a lot also.  I am now down to a very small, pink tree that is fully loaded with decorations.  My husband decided to put the whole tree in a bag and I gained 3 extra storage boxes!  Plus I have a few lights in the fireplaces and few little things on the fire mantles.  I remember my mother-in-law whipping out a little tree with fibre optic lights and not much else.  I may be slowly turning into her by following her example. 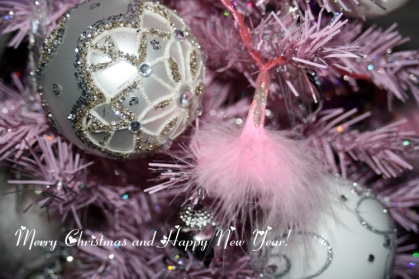 Since my husband and I went travelling around South America 4 years ago, we have had a chance to see how other cultures celebrate Christmas, very low key.  They seem to celebrate on Christmas Eve and we didn’t see many decorations around.  When you don’t have much money, I suppose that isn’t that important.

I don’t remember many of the presents I have received over the years, but I do remember being around my family, grandparents and cousins.  Somehow, being with people is what makes a holiday for me, and is probably why Thanksgiving is so huge in America as no presents are involved – just food and people.  It also doesn’t have any religious attachment to it either.

I am not a religious person, but I still like Christmas, having a tree, making dinner, and having people around.  It is the only day of the year when I get all of my Christmas CD’s out and actually enjoy singing along while doing the dinner.  This year we have invited a friend as she would be on her own.  Otherwise it would be just the hubs and me, plus the dogs.  We won’t exchange presents as we don’t need anything or we already bought something at the time it was needed.  My two boys are in different countries, and my daughter is creating memories with a grandmother who may not be around in the foreseeable future (she has dementia which has steadily gotten worse).  As my daughter lives in London, she would usually come down to visit for her Christmas beforehand, but this year she was travelling for work, so I am not sure when I will see her next.  This is what happens when children are grown, have lives of their own, and don’t live near you.  You have to share them with others.

Where I live they have caroling at The Bandstand on Christmas and Boxing Day.  If it isn’t raining, we shall go with the dogs and sing a few songs and then pop into the pub for a swift one before having our Christmas dinner.  The dogs don’t know about holidays and all they care about is food and having a walk.  We might get them a big bone to chew on.

So, that is my evolution of Christmas.  However you all celebrate, I hope you have a wonderful day.  Thank you for stopping by and reading my blog and hope to see you next year!

Ever since we came back from our travels, I have been working as a temp. I am currently working for the county council, which doesn’t give me a lot of free time. I am still trying to find time to write blog posts about our journey! I have been also trying to get back into painting and am finding it a big struggle. It is a challenge finding a balance between work, hobbies and family. I might need to get up earlier in morning!

While I have been struggling with balancing the above, my husband has been decorating the house. Last year he decorated two bedrooms and our WC. Since April, he has managed to complete the study and the hallway (up and down). It didn’t help that he ended up with a bad back for awhile, but he finally managed to get to a point where we can now install new carpet for the upstairs. Although I live in a relatively small house (two bedrooms) the paintwork was really bad; the doors needed stripping and re-finishing and the whole area required a huge amount of preparation. Preparation is always the worst part of decorating. The goal is to finish off the whole house before we take off on another adventure (and is why I am working all the hours I can!). We are getting our carpet installed this week and I don’t know if you can find anyone more excited about anything! It has been 4 years since I moved into my house, and considering I had been organising the work on it mostly myself, I feel it is about time I am finally getting the house to look the way I want it, with help now, of course! Some things are better with a friend! I will keep you updated on the progress.

I have painted every piece of furniture in my house that I possibly can. Unfortunately, my furniture painting didn’t turn into a financially viable concern, so I knocked it on the head. I still have a few pieces in the loft for sale! Unless I am going to use it or give it as a present, I am finished with painting furniture. The only things I paint now are picture frames and art.

Another reason I have come back to the blog is because in the process of Googling for inspiration and looking for art classes in my area, I came across my artwork on this blog. I forgot it was still on here! It seems that the less information I had about drawing and painting, the more enthusiastic and spontaneous I was about doing it. I have been trying to find some evening classes, but it turns out that the classes I am interested in tend to be in the daytime, when I am working. So I have been trying new things all by myself which can be a lonely journey. The upside to that is I have been trawling the internet and have found some inspiration by others and have bought a few more art books to get the creative juices flowing.

I have been trying to get my abstract on and working from Abstracts: 50 Inspirational Projects, by Rolina Van Vliet .  I am trying to be more free/loose with my painting as my tendency is to try and get every little detail. I think trying to get a lot of detail is great for drawing, but not always great for painting. I am finding the exercises in the book a bit of a challenge and will be posting how I am getting on with them.

So, here we are again, another new beginning, revisited!

After nearly two years of conducting a long distance romance with my sweetheart, things are finally coming to an end.  He’s moved in.  My love has taken early retirement which has made it possible to for him to move down to the south coast.

So, what happens next?

All future posts will be on our new WordPress blog.  We have big plans and are working to making our dreams come true.

Thank you all for your support thus far.  All the best!