I am back from my travels.  I sort of had a tech free holiday.  The hubs and I took the dogs camping in France.  I have been back a week and have been job hunting.  In-between job hunting and getting back to reality, I have been felting.  I even did some needle felting on holiday when I got the chance.  I still have a lot of photos to sort out and some blog posts to write for my traveling blog.  I am currently writing about camping with dogs on the Dream Big Pack Lite blog.  So much to do and is why you haven’t heard from me for awhile. 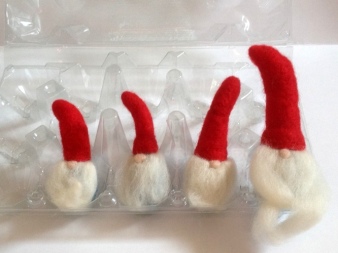 Here are the Gnome ornaments I made while on holiday.  They range on average from 3-3.5 inches high.  The big one is just over 4 inches and will most likely be a present for my daughter.  The smaller ones are quicker to make.  I’ve got six small ones made now and will make two more.  I love how no two are exactly the same.  That is the beauty of a hand made item.  I will have to get my Etsy Shop up and running again soon.  I won’t mention the C word, but you have to start early!

Gnomes are a fabled race of dwarf like creatures that live underground and guard treasure hoards.  As far as I am concerned, gnomes are real.  If you search the internet, there are so many types of gnomes and so many ways to make them.  I spent a few good hours looking at video tutorials before I worked out how I would like to make my very first gnome.  Firstly, most gnomes have red hats and blue shirts.  They also have beards.  They are also not very tall.  I always enjoy how others make their gnomes.  Some people even use wire armatures.  I still haven’t ventured into making anything with a full armature.  I wanted my first gnome to be easy, but still cute.  Here he is.

I can’t tell you how many videos I watched!  But I just cherry picked the bits that stood out to me and I created this little cutie.  I will tell you how I made him.  Firstly, all of his wool is Corriedale carded slivers from World of Wool.  The beard is a lovely soft topcoat that I purchased from a lady at the Fibre Fair that I went to.  Some people use curly locks, which I have, but I wanted something different.  I didn’t have any flesh colored wool for the nose, ears and hands, but I did have some flesh colored pre-felt Marino.  Surprisingly, it felted up really well and I may continue to use that as my go-to features wool.

I started by making the base with core wool wrapped around a skewer.  This little guy is made out of one whole piece, including the hat.  I sculpted the core wool for the had area and then I felted on the blue for his shirt and then red for the had.  I had to continually re-sculpt the hat area to make the folds.  I felted a separate piece for the hat brim.  Then I made the nose and ears before adding the beard.  That was the really fun bit.  I then made the arms and shoes.  I decided to use bells on the shoes.  I still thought he needed something, so I made a staff with bells on.  If I find a bell large enough, I will add it to his hat and then he will be my Jingle Bell Gnome! 🙂  Although I think this Gnome is easy to make, he required a considerable amount of stabbing as I wanted him to be very firm.  He doesn’t bend.  There are no wires.  There is a trend for what I call soft felting and moveable armatures.  Although soft felting makes it easy to pose an item, it is also easier to damage it.  So, I have decided that I will stick to firm felting and if I venture out to create critters on armatures, they will end up in one pose only.  In fact, I went over all of the little critters I made so far and gave them a good poking!  They actually look better and will last longer.

I had some time to figure out how I wanted to display my Gnome, so I made him a base as the piece of wood I have is too small for him.

I really need to take better photos, but hopefully you get the idea.  He is standing on a piece of grass with stones and moss.  After all, they do live in the woods!

I have put my shark mobile on hold and decided to focus on small things that I could put into my Etsy shop.  I am currently running a 50% off sale until the 27th of May.  After that, I shall put the shop into holiday mode for a month.  I shall be focusing on making items for Christmas.  I know!  I don’t actually think about Christmas until December!  However, when selling seasonal items, you have to start well before the season.

Here is my Christmas mouse! 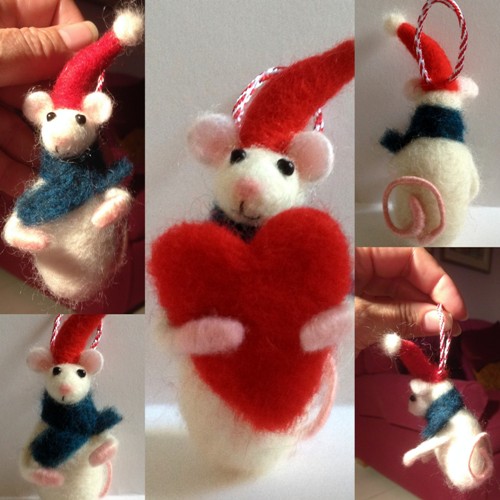 This doesn’t have to be a Christmas mouse, but you can make a Christmas anything if you stick a Santa hat on it.  I thought the mouse lacked something, so I felted him a big heart to hold.  This was also the first time I used beads for eyes.  I usually felt them in, but I thought I would try something different.  I think they looked cute.  Everything is felted apart from the eyes.  I loved him so much that I decided to make some more!

Body parts.  While my husband took over the dining room table to pimp up a new crate cover for the dogs with safety reflective strips and such, I sat propped with my foot up on the footstool in the living room making body parts for a total of 6 mice.  It can be time-consuming to make a critter from start to finish, but this way seemed to go faster.  As I made my mice, I slightly modified the way I made them.  I really wasn’t happy with the cord I had, so I bought a thinner cord which makes it easier to stick under the hat for hanging.  Also, I added bits of fluff around the Christmas hats for fur.  I also changed 4 of the hats and added bells on some.

So, here are all of the Christmas mice completed.  I am very happy with how they turned out.  Each one is different and fits in the palm of my hand.  It is like they have their own personality.  I need to tidy them up a bit more and take more photos before they will be ready to go into my shop!