I learn something new every time I make a vessel.  I had some leftover fabric I made for applique.  The fabric didn’t have any stitching on it, so I had high hopes that the applique would adhere to the wool better than on the last vessel I made.   I am trying to use up some of my wool that I originally purchased for needle felting.  This pink is great for noses and tails, but I am not needle felting at this time, so I decided it would make a great contrast for the bright pink applique.  The wool is Corriedale and is a bit too itchy for making hats (though some people do), but is great for making vessels.  I don’t measure out my wool when making vessels.  I had about 100g of this pink and I still have a little bit left over.  I don’t know what was going on in my brain when I was laying out the wool, but I used only 3 layers when I normally use at least 4.  This created some thin spots that I wasn’t aware of.

Here is the completed bowl.  When I make a bowl, I tend to cut the hole in one side of the resist.  It is also possible to cut the hole at the top of the resist.  As I stated above, I wasn’t thinking clearly when working out the design and should have put the little hearts slightly below and in-between the big ones on the same side, or I should have decorated it with a view to cutting the hole at the top.  I was trying to avoid putting the applique on the seam.  This created some large blank spaces on the vessel.  Luckily I had some mother of pearl discs from a necklace and bracelet I deconstructed and some beads to fill in the gaps.  Although thread won’t felt, I used some for decoration and I laid down very thin wisps of Merino in the same color as the pink to hold the threads down. The wisps are so thin you can barely see them, if at all.  The applique felted very well, although there were a few areas that didn’t stick down too well and that seemed to be where there was a fair amount of silk fiber that was embellished onto the prefelt.  I just needle felted them down into the bowl and they are now felted in nicely.  I also used some of the Corriedale to needle felt over some of the threads where I stitched on the large pink beads.  Seeing that annoyed me when I looked in the bowl, so I covered them up.  As you can see, the bowl looks lovely on its own and with some fairy lights inside.

On another note, I sold a couple of my Xmas mice and my Long eared bunny on FB Marketplace of all places.  The lady doesn’t live far away and will be coming back for a couple of rabbits and my bumble bees next week.  I’ve reduced the price for the bunnies and bees considerably, but I do need to make space for more wool!  There is a sale on this month! 🙂

I am still working on my Pink WIP.  It is slow going and looks nothing like how I started it.   I am now finished with work and so I do have some time to work on it a little each day.  The open paint medium added to the paint makes it take a long time to dry in this colder weather though.  I may need to start on something else while the paint dries!

I wasn’t happy with the transparency of the paints and decided to make them more opaque.  So I made some paint samples and made a chart. 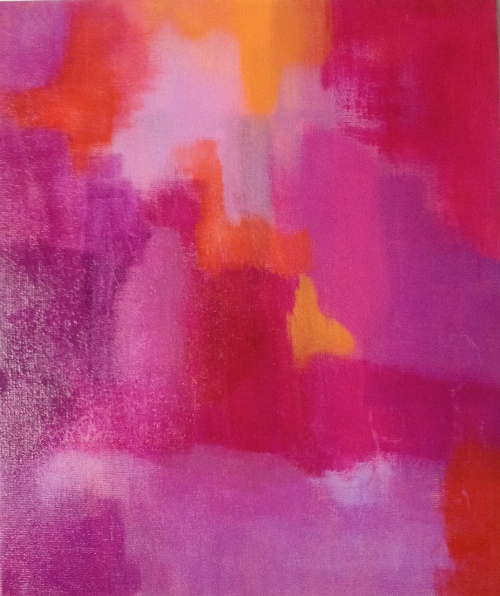 This is my starting point.  The open medium made the paint quite glossy.  The photo looks better than in real life.  I love the colors, but not the way they are.  The painting looks nothing like this at the moment and I am hesitant to share it right now.

Here is my paint chart.  I didn’t use all of my reds, only the ones that I knew would make a pink, rather than a salmon color, so no cadmium or pyrole red.  As you can see, some reds go more pinky and brighter than others and that is because of the blue hue in them.  In my top photo, I used the paint straight out of the tube or bottle.  Pretty much a no-no, but I like the vibrant colors.  When white is added, you get a more opaque and lighter color.  I also had some ready made purples that I added white to also.  The ultramarine violet goes quite grey and pale and some of the others are on the pink side.  I think the best purples are made when mixing the reds with ultramarine blue.

My palette.  Almost a work of art in itself.

I have had some time over the weekend to actually do some painting!  Yay!!!  I have had ideas buzzing around in my head for weeks!

Wow! Bright huh?!!  Glare too!  I have been using fluid paint with open medium and boy does that make the painting shiny!  I still have a way to go with this and to add some collage and more marks.  I am working on canvas board 10×12 inches.  I am also working on a smaller canvas board 5×7 inches but the open paint stays wet for a long time so I only have one coat of paint on that at the moment.  The cooler weather makes it take longer to dry.  Here is the inspiration: 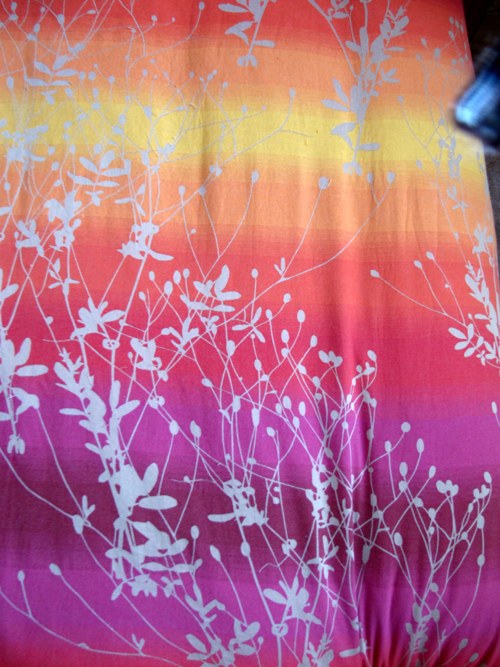 I love this duvet cover set.  My bedroom has the purples, and paintings on the walls pick up some of the other colors too.  The flowers on the duvet are gold.

My plan is to make two large panels (50x50cm) to put over the bed.  I thought it would be a good idea to test my idea out on a smaller panel first.  Watch this space.