Carrying on from my previous post on Mammograms or breast screening as they now call it, I am pleased to say that my results are clear and showed no signs of breast cancer.  Coincidentally, I bumped into my friend yesterday (the one I met in the hospital the same day I had my scan), and she asked me if I had heard anything yet.  I got the letter today, so hopefully she will have her results soon and have as good news as I did.

I won’t have to go again for another three years.  I have been advised to continue to be breast aware and notice any changes in my breasts.  I might need a second opinion.  Amor has offered his services.  That is so sweet.

I don’t mean to make light of breast screening at all and I am so relieved that there is nothing wrong with me.  There are many women that are not as fortunate.  These screenings are extremely beneficial as early detection can help save lives.  What is a little discomfort compared to dying?  So, if you are asked to attend a breast screening, please go.

I have had a little scare last November with the results of a pap smear showing abnormal cells and have had to have a colposcopy which resulted in the removal of part of my cervix.  Fortunately, the procedure was successful, but I now have to have regular check-ups every six months.

The aging process brings with it many changes and challenges.  The skin is not as firm and supple as it used to be.  Wrinkles appear overnight.  If what you thought was a pillow crease is still there at the end of the day, well…   Bruises take longer to disappear.  Gravity takes its toll.  We are basically slowing down.  I don’t mind slowing down, but I would really like to do it at my own pace, and as long as I don’t come to a complete stop, I am ok with what is happening to me.

So, the doctors may be taking bits of me and my body is slowly re-arranging itself, but life is actually better than ever.  Go figure. 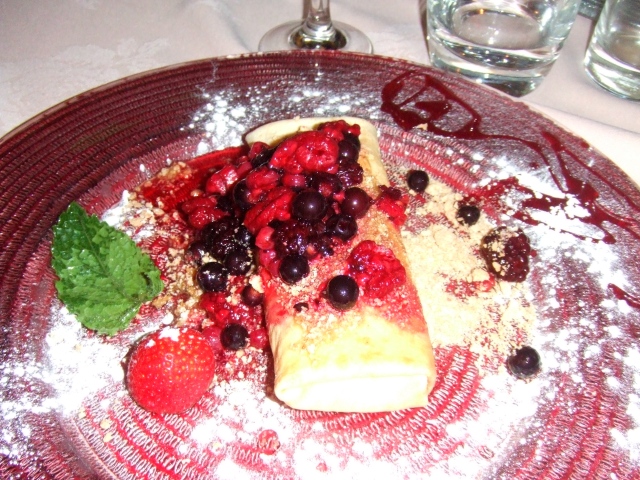 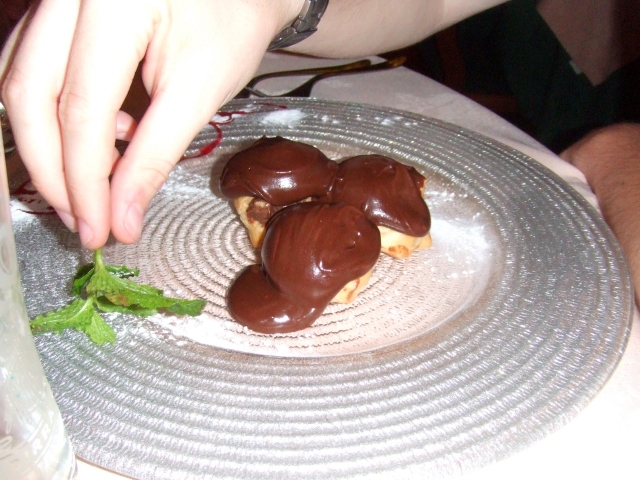 Profiteroles with chocolate sauce to die for 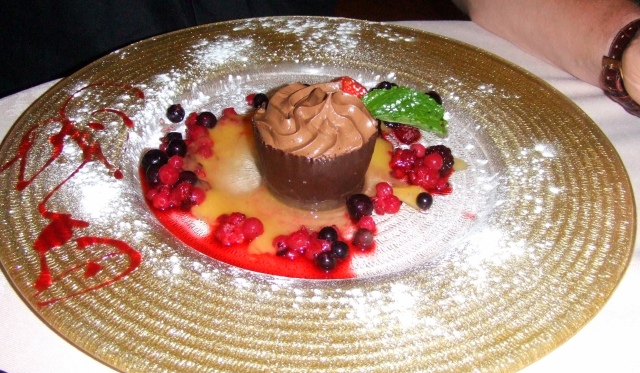 After a successful afternoon spent at Airbourne 2009 on Friday, Amor and I headed off for Saturday’s exhibition.  As the flying didn’t start until 2pm we were in no great hurry to make our way to the seafront.  We stopped at the Sunflower Café on South Street for Brunch.  I discovered this café a few months ago and have been impressed with the quality of the breakfasts (which is all I have tried so far) and the cleanliness of the premises.  Tony (the owner and cook) has an open kitchen and everything is sparkling clean.  I can’t recommend it highly enough.

After Brunch, we headed off to the seafront.  The position I occupied the day before was pretty busy and Amor suggested we move elsewhere.  We found a place to stand when Amor had the great idea of purchasing a couple of folding chairs from one of the many stands along the promenade and went of to find some while I waited and saved our spot.  Having scored a couple of chairs (very comfy), we settled down to watch the show.

There was a couple next to us with some serious camera equipment.   They were down from Doncaster to see the airshow and photography was one of their hobbies.  I was having serious lens and camera envy sitting next to them.  The couple were actually quite lovely and happy to share information about their equipment, and I learned a bit more about cameras and lenses than I knew before.  Something else to add to the Christmas list!  On Friday, I had access to Amor’s camera, my little camera and my old 35mm Cannon EOS.  Saturday and Sunday, I just had my 35mm and Fuji FinePix Z1.

Saturday started pretty much like Friday, overcast and dull but soon burning off to a lovely sunny day.  The Red Arrows weren’t on until 4:30 but we happily watched the other planes do their stuff until then.  I was soon losing battery power for my little camera, so I didn’t take that many photos as the day before as I wanted to save some juice for the Red Arrows,  but Amor managed to capture some lovely images.

and here are some photos by Amor

The zoom on Amor’s camera is better than mine and I think he did a great job capturing these images considering the speed of these planes.  Who knows, he might start his own blog!  He also took a few videos and has kindly allowed me to upload them to youtube and post them here, just so you can get a feel of our day out and how fast those planes were moving.

We had an early start on Sunday as the show started at 12pm with the Red Arrows first up.  The day was sunny with low clouds.  The spot we had the day before was taken, but we found a spot further along, no problem.  My neighbour on Sunday was a lovely old man from Polegate.  He used to do air rescue during the war in the helicoptors.  We had an interesting chat about that while Amor scored some caffeine from the café.  As we arrived a bit early, we settled down to read the Sunday papers before the Red Arrows turned up.  Amor wasn’t taking photos and I was just going to try and capture the Red Arrows.  Sometimes it is important to just relax and enjoy yourself rather than always trying to capture the moment for posterity, or my blog!  As the clouds were low, the show was different from the days before and therefore the planes came in closer and didn’t perform many high maneuvers.

The show finished around 4:30 but the event wasn’t over yet with fireworks to look forward to.  So we went home to relax and have dinner before heading out in the evening, but not before stopping for ice cream!  We hadn’t been to the seafront at night before and so I was pleasantly surprised to see the Pier and seafront all lit up.  There was a real party atmosphere and it got quite busy.  We arrived early and found a place to sit with a good view.  Neither of us bothered to bring a camera but I found a video on youtube of the fireworks courtesy of the Sussex Press Agency.  I don’t think the video really does justice to the spectacular fireworks we witnessed.  Some things are just better witnessed in person.  It was pretty amazing though!