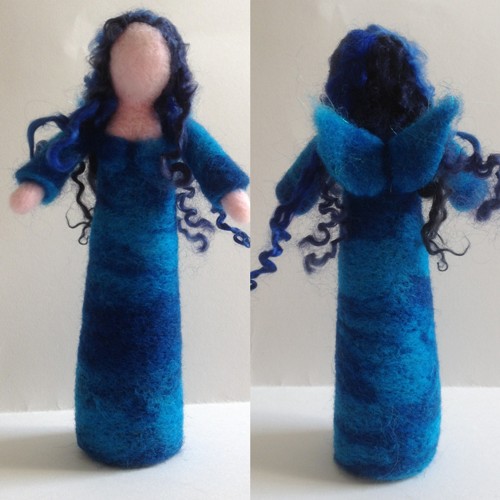 This is my first doll.  My actual intention was to make a very simple doll that could actually be played with and that was dressed in old fashioned clothes.  However, this doll had other ideas.  While I was felting her head, it came to me that she wanted to be an Angel.  Oh great, I thought!  How the heck am I going to do that?  And as I kept stabbing it all came to me and here she is!  My Ocean Angel!

I made her in a similar manner to my gnomes, so she didn’t really take very long to make.  I think I have the gnome thing down now.  You can’t really tell from the photo, but there are Angelica fibers (sparkly) in her wings.  I am still working out how to finish her off.  Any ideas will be greatly appreciated.  Thanks!

Meet Sedgewick The Winter Gnome.  He is finished except that I am waiting for his ski poles to arrive and then I can glue him down to the wood base.  He is only a few inches high.  I really love him!

After felting my Forest Gnome, I took a break from needle felting in order to do some housework, and other things that needed doing! 🙂  Seriously, I didn’t do any needle felting for about 24 hours!

I made some cushion covers for the van. 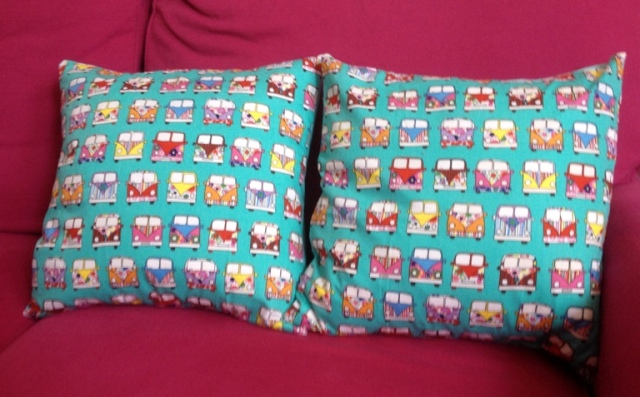 I had this fabric for over a year!  I still have my American (Kenmore, from Sears) sewing machine which is over 30 years old.  It requires a very large transformer that weighs a ton, so I don’t bring out the sewing machine very often.  However, my husband was using it to modify the new dog crate cover for when we tow the dogs on the bikes.  He was adding reflective safety webbing to all the sides so the cars and other cyclists can see it.  It looks really good.  BTW, if you need any large zippers doing, he’s your man.

As the machine was out, I thought it would a good time to finally make the covers.  It has been awhile since I used the sewing machine and it took a little while to re-acquaint myself with it and work out the correct tension.  These are envelope covers, so quite easy to make.  I also modified a couple of T-shirts to add ruching to the sides.  Did you know that if your T-shirt is cut square at the bottom, it makes you look stubby?  Now you know!

So, cleaning, laundry, and sewing took me all day!  While admiring my new cushions (the hubs loves them too!), I thought I would see if I could make a little felted Campervan.  There aren’t many on the internet for inspiration, but I have some toy models and went from there.

This guy is quite small, just a bit larger than a credit card (which I used as a reference to felt down to size).  I started him after dinner and finished him off today.  A lot of stabbing went into this little guy, but he is still light as a feather.  I just need to thread some nylon through him and he will be ready to hang from the rear view mirror!